Dwarf Sagittaria Subulata aka Dwarf Sag is a great and undemanding foreground plant that can do well in low to medium light. A rich nutrient substrate is required and CO2 is optional. This plant grows very fast in the right environment.

Based on 1 review Write a review

I hesitated to write a review because I don't like to post critical feedback, but the website prompted me a couple times. I ordered three of these through the "Buy 2 Get 1 Free" promotion, which totaled $20. I received roughly 20 plants, so a couple extra, working out to about $1 per plant. Each plant was very small--about three leaves (blades) per crown, each less than 2" long (smaller than the other pictures, which might be after the plants became established, which is great). I wouldn't have purchased plants this size at this price from a pet shop. That said, if I think of the $20 as including $6-$8 in shipping, then $12-$14 is a perfectly fair price for enough healthy crowns to start a foreground. They did come a full week after ordering so just be aware that shipments are sometimes delayed in the mail.

The dwarf Sag u got came in great condition and is already growing in my tank!! Amazing! 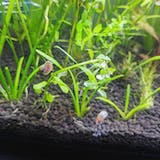 First off I want to say that I received way more than expected. These plants are healthy and strong and I am anxiously awaiting for them to become established. Thanks APF

As always beautiful healthy plants. Very fast shipping. So very pleased with all my orders.

Came in green and healthy awesome!