🇺🇦 We Stand with Ukraine 🇺🇦

🇺🇦 APF stands with our friends, family, and with all people of Ukraine🇺🇦

This listing is qualified for

1) To qualify for this offer, you must add 2 quantities to your shopping cart.
2) We will automatically send 1 extra plant for free. Offer valid on same plant, no mix n' match. Restriction applied!

Vallisneria Spiralis 'Leopard' is commonly known as Vallisneria spiralis 'Tiger', Straight Vallisneria, Tape Grass, Jungle Val, Italian Vallisneria, or Eelgrass. It's a perfect background aquarium plant and it prefers good light and a nutrient-rich substrate to grow well. This variety is similar to the original  Vallisneria Spiralis but it has a leopard stripe on the leaf. Under high light, this Val will turn to a beautiful red color on top of the leaf.

BUY 2 GET 1 FREE* PROMOTION | Simply buy 2 quantities, we will send you 1 extra for free on eligible purchases. Offer valid on the same type of plant, no mix n' match, and on the same transaction only.

Disclaimer: Pictures are not the actual plants you will receive, but a sample representation. Unless specific, we don't guarantee aquatic plants will be free of pests, pesticides, grow emerged, or submerge.

Trade Names: Vallisneria spiralis 'Tiger' / Vallisneria spiralis 'Leopard'
CO2: Not Required
Growth Rates: Fast
Difficulty Level: Beginner
Nutrient Substrate: Required
Lighting Requirements: Medium-High
Handling time for Live Plants orders:
Live plants are shipped from Monday - Saturday: Most plant-only orders can ship out within 1-3 business days excluded out-of-stock, pre-order, or backorder products.
Handling time for Live Animals orders:
Live Animals are shipped from  Monday - Wednesday: Live Animals orders take longer to ship. We only ship Live Animals orders when they can be delivered within the week so they don't spend an extra day in transit on the weekend.
Handling time for Live Animals ranges from 1-5 business days depending on the weather and health of the livestock. We will email tracking information when the order is shipped.
Free Shipping: We offer Free Shipping on eligible orders.
Delayed Parcels: Sometimes your packages may take longer than normal to arrive with U.S. Postal Service or our chosen courier. We are legally obliged to wait 15 working days (3 weeks) for a package to be considered lost. See U.S. Postal Service website for further detail.
Refused Shipment Policy: All customers must keep their address information up-to-date!

Cancellations: We understand sometimes thing goes out of control.

Plant was very nice and healthy-looking when it came in, I was excited. However, I bought it as a complete plant newbie, and thought it could thrive planted bare-root in pure eco-complete (very coarse) substrate, in a relatively low-light tank (duckweed cover & cheap light), in hard water, pH 8, around 70-75F (unheated), and understocked with a few root tab pieces and occasional water column ferts added. The Val started off by melting back from the tips of the leaves, which arrived cut :( See photo 3. It would be nice if APF could not cut the Val leaves, as they should know this causes them to melt! I quickly learned that Val is **very** sensitive about damage to its leaves, so warning: if any leaf gets damaged enough (e.g. from rubbing against a filter intake or some wood, etc.) that entire leaf might melt all the way back!!! HOWEVER, despite my relatively nutrient-poor substrate & suboptimal light levels, and the melting sensitivity, the plant has steadily continued improving over the last few months since I began to add more root tabs, moved things around to give it more light and space to grow without rubbing its leaves on things. So FINALLY the plant is thriving, despite growing a lot more slowly than it probably would with more nutrient-rich substrate and more light. A smaller baby plant I separated out at the beginning has simply melted off & not grown back still beyond tiny, 1 inch leaves. All the leaves shown in 2nd photo are from today, all new growth from since I got the Vals. Despite my challenges, I'm giving 4 stars because APF did say nutrient-rich substrate is "required" and I might have had much better luck if I had taken that to heart earlier, giving regular root tabs, instead of trying to supplement water-column (Val doesn't respond to this, seems to feed from roots ONLY). Also, I've had great luck from APF with other plants, and I actually plan to order more of this exact plant from APF now that I've finally troubleshot it successfully! But don't expect any red from this plant without high light ... all you will see is a slightly speckled pattern throughout the leaf! See photo 1 for detail. I don't care and still think it's beautiful that way! 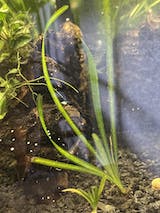 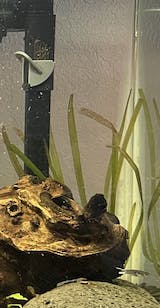 After shipping, these guys bounced back and are thriving. I'm getting a lot of new growth that's bright green and I'm still trying to bring out some of those deeper reds, but I love the slender leaves. I planted these under my larger Valisernia, and they look great. They're shooting new growth everywhere and looking great. Highly recommend this!

This val has a lot of interesting colors and patterns going on, and a very nice form. The plant came in great shape, and the perfect size for a 10 inch tall tank. My ghost shrimp love it. 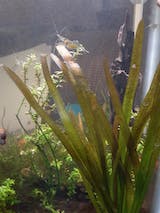 The plant arrived healthy and is doing great a little over a month later. It’s sending out tons of runners and the leaf growth is noticeable daily. The shrimp love hiding in it, I constantly find molts.

Usps took seven days too deliver ,but plant was well wrapped and survived the trip.plant is as advertised and after acclimating will be a beautiful addition to the tank. 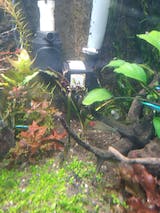 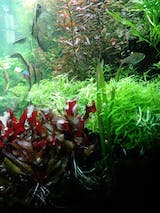 The order of Leopard is plenty and all mine came in healthy no complains!!

Alternanthera Ficoidea 'Rainbow'
No reviews
from $499 from $4.99

Subscribe to get special offers, free giveaways, and once-in-a-lifetime deals.