14 reviews
$15.99 $19.99 You Save 20% ( $4.00 )
Fissidens Fontanus from North America also known as Phoenix Moss and US Fissidens. It grows relatively slow and required CO2 and high light to grow well. It grows best when attached this moss to rock, stone or driftwood. It will grow roots and stick to the surface just like any other moss.
Handmade Especially For You! The aquatic plant that already attached to a mat of slate rock approx. 3.9" x 1.9" / 10cm x 5cm in sizes. Simply drop them in the aquarium and watch them grow!
CO2: Recommended
Growth Rates: Medium
Difficulty Level: Beginner
Nutrient Substrate: Not Required
Lighting Requirements: Medium - High

Based on 2 reviews Write a review

First time customer. My moss and the other plants I ordered all arrived in good condition, looking healthy. Thanks! I'll probably order here again.

Nice looking moss! I detached it from the slate it came on and tied it to a rock in my aquarium with some fishing line so it will grow and cover the whole rock! 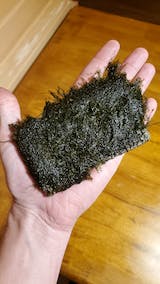 I have ordered the Fissidens Fontanus two times now and both orders were great. The second order was a bit better, the moss was very thick and long.

I have ordered numerous mosses through the years and I have to say that hands down my APF order has been the best right out of the package. The Fissidens on the slate was so lush, full and green I was able to pluck fronds from the slate on the second day to tie and cover some small pieces of spider wood. Didn’t even make a dent in the fullness of the moss colony on the slate. A week later it is doing great both on the original slate and on the driftwood I propagated some of it over to.

B
B.
Loss of moss for your buck

Came with a lot of long and thick moss. Arrived green and healthy. I actually detached most of it and put it on hardscape... hopefully it works out.