Based on 1 review Write a review

To everyone who reads this Aquarium Plant Factory is a great company. They have a great selection of plants at great prices. The sale they put on some of there plants are also insanely good. I have made several orders from them and all my plants have arrived well packed and health. I must say that I have order 20+ Crypt Pink Flamingo and Anubias Nana White tissue cultures and they are all thriving. There customer service (I have interacted with Tristan) is amazing. They respond quickly and sometimes late into the evening. I received an email from Tristan at like 9 or 10 pm est about my order and then he responded to my reply the same evening. That in INCREDIBLE customer service. I highly encourage all to give APF shot and see your aquascaping dreams come to life. I cannot wait to have an excuse to buy another tank or reset one of my 10, yes 10 tanks, and pick out a bunch of new plants. Keep up the great work APF Team!

Usps took seven days to deliver ,so plants even though well wrapped were cold and melting ,this plant seems to be better off than the rest .its exactly as advertised and will do very well in my tank. 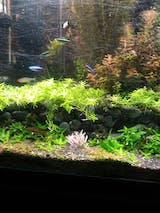 Not looking good as far as a tissue culture goes. For some reason I cant seem to find anyone that can get me this plant in a very healthy state

C
C.J.
Not what i anticipated, and i think i messed it up..

Received what looked like a bulb with a bunch of half inch white leaves popping out of the top of it with very little roots at the base of the bulb(didn't see many but maybe the whole bulb itself were roots haha idk). It didn't look good, but i didn't think much about it until it died in my aquarium a week later, lol. Started looking into it after it died and realized that what i received looked absolutely nothing like what i see in the example picture of this tissue culture. I'm not going to tank the ratings on this plant though because i do think* it was my fault that they didn't make it but i'm not entirely sure, probably is on me. I should have done more research that's for sure. I had the impression that this tissue culture was ONE plant ( description says pack of one*), so i planted the whole thing as one into my substrate and it's now dead(leaves fell off and cant see the plant anymore. So i looked up some videos on this tissue culture from other sellers and they split it into multiple plants.?. You live and you learn! -1 Star due to the health of the plant upon arrival (nothing like example picture) and because i'm salty that i spend 14$ on a plant that is now dead hahaha.

Take this review with a grain of salt though, i'm very new to aquariums and such. I have no idea if the plant will bounce back and shoot new leaves up or if i should go digging to find a dead bulb and remove it before it messes up the water.

Regardless, APF is a great shop and they do great work! Still love em! Not too sure what to think about this plant right now though but one thing is for sure, always do your research!!! (Picture shows plant when first planted in tank, its the white clump)

The plant looks great! So far so good. Fingers crossed.