🇺🇦 We Stand with Ukraine 🇺🇦

🇺🇦 APF stands with our friends, family, and with all people of Ukraine🇺🇦

This listing is qualified for

1) To qualify for this offer, you must add 2 quantities to your shopping cart.
2) We will automatically send 1 extra plant for free. Offer valid on same plant, no mix n' match. Restriction applied!

Bucephalandra Alamanda Blue (Bucep / Buce plant) is a genus of flowering plants in the family Araceae. There are more than 30 species of Bucephalandra that have been discovered mostly by S.Y. Wong and P.C. Boyce. Most of the species are found in Borneo. Bucephalandra is usually found growing as dense mats over stones or rocks in streams or rivers in moist tropical forests. The colors of the leaf range from dark blue to green, often with white, yellow, red tinges or spots on the back of the leaves. Bucephalandra grows best when attached to the stone, rock, or driftwood.

BUY 2 GET 1 FREE* PROMOTION | Simply buy 2 quantities, we will send you 1 extra for free on eligible purchases. Offer valid on the same type of plant, no mix n' match, and on the same transaction only.

Disclaimer: Pictures are not the actual plants you will receive, but a sample representation. Unless specific, we don't guarantee aquatic plants will be free of pests, pesticides, grow emerged, or submerge.

Handling time for Live Plants orders:
Live plants are shipped from Monday - Saturday: Most plant-only orders can ship out within 1-3 business days excluded out-of-stock, pre-order, or backorder products.
Handling time for Live Animals orders:
Live Animals are shipped from  Monday - Wednesday: Live Animals orders take longer to ship. We only ship Live Animals orders when they can be delivered within the week so they don't spend an extra day in transit on the weekend.
Handling time for Live Animals ranges from 1-5 business days depending on the weather and health of the livestock. We will email tracking information when the order is shipped.
Free Shipping: We offer Free Shipping on eligible orders.
Delayed Parcels: Sometimes your packages may take longer than normal to arrive with U.S. Postal Service or our chosen courier. We are legally obliged to wait 15 working days (3 weeks) for a package to be considered lost. See U.S. Postal Service website for further detail.
Refused Shipment Policy: All customers must keep their address information up-to-date!

Cancellations: We understand sometimes thing goes out of control. 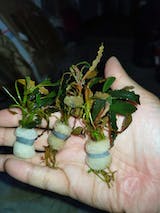 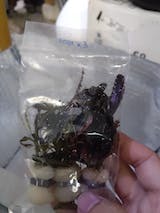 Ordered 3 of the Alamanda Blues and each bundle was actually 3 plants. Nice color and vigor. Great purchase.

This is my first purchase from APF as well as the first time I'll have any Bucephalandra. Anyway, after doing some research on buceps, I converted a matured 50-Gallon tank to a holding tank (for the four sets of BUY2GET1FREE items labelled in the attached photo) as I'm cycling two other tanks that they'll be placed in. As this was my first purchase from APF, I didn't order all the plants that I intend to stock those other tanks with as I had no idea what condition their product would arrive in. However, based on the timeliness with which my order arrived, the obvious care with which the product was packaged, and the healthy plants (and extra plants) that I received, APF will now be my go-to plant supplier. As a matter of fact, I just ordered a few more buceps (Brownie Ghost).

Details: I am located in the Seattle area of Washington state. I placed the order on Saturday, June 27, 2020. APF sent an acknowledgement email with the USPS tracking number which initially indicated a delivery date of Friday, July 3, 2020 but was updated a few days later to Thursday, July 2, 2020. Delivery was made shortly after noon on July 2 (according to the USPS tracking info) but I didn't realize that they had arrived until about 2.5 hours later when I received a delivery notification email from APF. I was worried that everything would be baked but after retrieving them from my mailbox, I was relieved to see that APF's packaging included heat shielding and all sets of packaged items were sealed in moisture-retaining, custom-sized, plastic bags. I took them inside and left them in a cool area of the living room where the holding tank is located as I was still doing work-related stuff. Finally got to them around 8 p.m., opened up all the sealed plastic bags, carefully removed each set of buceps from their foam and lead weights, inspected, rinsed and trimmed (minimal trimming was required), got the buckets I had with hardscape soaking... one with driftwood and the other with Seiryu... and started super gluing everything... also added a few Anubias Nana that I had on hand. Finished around 11 p.m., gave everything a once over, then placed them all in the holding tank.

It's now 3 a.m. on Sunday, July 5, 2020 and I took the attached photo about 2 hours ago. Therefore, the buceps have been in the holding tank for a little over two days with no melting that I'm aware of. I'm totally satisfied with APF.

Love how the plants from this site are always in amazing health with absolutely no melt in the leaves. Even after 8 days of shipping!

Came in and had 4 plants in the bunch. Two bigger and two smaller. Was nice to have different size verity to really add some depth to my tank right away. Was so happy with my order that I ordered some moss and shrimp! Can't say enough good things about these guys!

Came shipped in thermal wrapping without me even asking. 3 bunches netted 10 plants. Way more than I expected and every plant was alive and well. Will definitely order from here again.

Subscribe to get special offers, free giveaways, and once-in-a-lifetime deals.