7 reviews
$15.99
Blyxa Japonica is a popular grass-like stem plant from Japan with bright green color and natural appearance. Made famous by Takashi Amano in his nature style aquarium. It can be easily propagated by removing the side stems and re-planting them, which roots and forms another plant. The leaves can develop a golden or red hue when grown under high light with CO2 and fertilization.

Based on 2 reviews Write a review

I bought 3 of these Blyxa Japaconica and 3 Anubias Coffeefolia. The anubius were beautiful... but these plants were awful. They were completely covered in hair algae and the rest of the plan is just stems... I'm not sure if these are even the right plants that's how bad they are.

Plants are outstanding, ordered a total of 3 times to carpet my 180 gallon aquarium with blyxa Japonica. Plants arrived promptly and quickly adapted To my aquarium. Thank you for the fast a great service.

The plant arrived in great condition and what was nice is that it also came in a clumb, so it allowed for more opportunities to plant throughout the tank. The negative is that it is a shredder, so I am constantly finding grass floating at the top, not my favorite for me. I personally would not use this plant again, nothing with APF's quality, just something I am not a fan of. 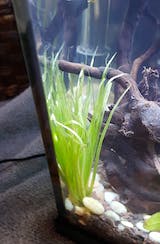 They got a little damage due to the cold weather during shipping, after a little nursing they will be a beautiful addition to the tank. Thanks as always. These photos are what they look like a couple of hours after opening the shipping box and just planted. I look forward to sending pictures after they all have time to rebound!

When I first received the package the plants had melted slightly but nothing that wasnt recoverable. I love this site and would recommend it to anyone looking for plants. The no shipping is really what I stay for. ANYWAYS I put it with the other new organisms I had in my QT tank which sadly had an outbreak of ich from the new pleco I purchased from my lfs. The plants started dying from medications and I moved it to a container by the window to recover, but had eventually died due to the amount of damage.

Ok so this is the miracle part, I reused the container to rehabilitate a different plant that wasnt doing well in its lowlight situation and eventually moved the plant out. The empty container still had the substrate in it but had been stirred around and remained completely empty of plants. Weeks later I see a Blyxa Japonica baby making it's way out of the substrate. Im genuinely shocked but the plant is now growing 6 leaves strong 👍😭 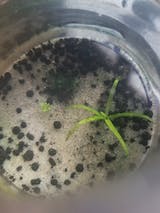