The Yamato Shrimp, Japanese Algae Eating Shrimp, and Japonica Shrimp are all names for the Amano Shrimp. Amano Shrimp is indigenous to Taiwan and may be found in practically any clean river in Taiwan.

Mr. Takashi Amano utilized and suggested a lot of these shrimps in his Nature Style Aquarium during his career since they are fantastic organisms for maintaining healthy fish tanks because they can consume practically all sorts of algae and leftover food from the aquarium.

Here at Aquarium Plants Factory, we offer captive-bred and wild-caught Amano Shrimp. Captive-bred is usually very consistent and small in size and wild-caught Amano can be very large. Amano Shrimp is very hardy and easy to keep which is perfect for beginner shrimp keepers. Breeding Amano Shrimp can be challenging because it required transferring the offspring larvae to brackish, seawater then back to freshwater again. However, if all the breeding conditions are met, the result is satisfactory.

Disclaimer: Pictures are not the actual animal you will receive, but a sample representation. Because of the natural variations in each species, it may be different in shape, size, color, and personality. Unless specific, we don't guarantee the gender of the animal.

Copper is toxic to invertebrates such as aquatic snails, crabs, shrimps, etc. Many commercial fish foods, medications, and plant fertilizers contain copper sulfate. Please avoid any aquarium product containing copper of any form or they may cause harm or even death to your invertebrates.

All my Amano shrimp arrived alive and are all doing well in my tank. They were very small but healthy and I was afraid, due to their size, that they may not survive in my tank but a couple days after receiving my order I saw a couple of them scurrying around the bottom of the tank under plants and rocks. Hopefully they will survive and grow so that I will be able to see them eating and taking care of my tank. I am very happy with the shipping and everything about my order seemed very professionally handled from ordering to receiving my order. I will gladly order from APF again!

Ordered 10 very active Amano Shrimp and am very pleased with the size. Shipping was freaky fast, 2 days from California to Michigan. Drip acclimated them and they are going to town in both a 40 and a 125. It’s been over a week and no losses. They’re beginning to learn the fish aren’t interested in them and are starting to venture out in the open.

I just got these shrimp yesterday and was pleasantly surprised I got an extra one with my order. They are about twice as big as my cherry, blue, and yellow shrimp but they all seem to be getting along well. These amano just went to town on my decorations, eating algae and other stuff. I'm really happy with them. 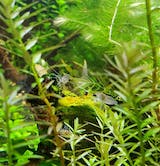 My amano shrimp came in very quickly given the circumstances, and I appreciate the communication from the APF team. I received 6 when ordering 5 and they all have taken to my tank. They are skittish and have been hiding out, but I see one here and there. As long as they are happy I don't mind their secrecy. They are great because they tend to not mind disturbances when you're touching up your scaping.

It's a party for these bad boys. Drip acclimated over 12 hours to acclimate them. Have a pretty hard water content and they're still partying. 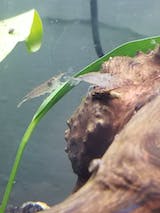 Shipping was quick and the amanos arrived safe and sound. They've acclimated to the tank and have inspired my existing shrimp to come out more! My community tank is complete!